What is the favorite musical genre of Americans?

This is an extremely difficult question to answer, with several different styles resonating strongly on the touring circuit. According to a 2015 ranking by busbud which has just been published, Country music at the top of the genre list for 13 different states, depending on touring activity.

Each major tour of 2015 was factored into the analysis and then compared to each state’s shows.

The country did not dominate the South as expected. The musical genre topped the charts in Alabama and Arkansas, but also in Hawaii, Idaho, Utah, Ohio, Pennsylvania and Alaska, among others. Some prominent country artists include Luke Bryan, Jason Aldean, Shania Twain, Garth Brooks, Kenny Chesney, and Tim McGraw, among others.

Right behind was Classic / old rock, with mainstays like the Rolling Stones, The Who, Foreigner, U2, Rush, ZZ Top and America keeping the flame alive. In total, Classic Rock and Oldie as a category dominated 11 different states, all surprisingly east of the Mississippi River.

In third place come the softer sounds of India, a catch-all and somewhat vague category that cuts across rock, folk, jam and even electro groups. Overall, Indie topped the charts in 10 different states, with bands like Mumford & Sons, Sleater Kinney, the Avett Brothers, and James Taylor among the top performers.

GED in fact, surpassed only one state: Nevada. That’s thanks in large part to EDC, or Electric Daisy Carnival, and an uninterrupted schedule of Vegas poolside nights and DJ shows. Indeed, EDM reshaped Vegas, and in turn, Vegas played a major role in EDM’s explosive growth.

Pop, who ranked number one in California but none of the other states; and R & B / Soul, which only surpassed Hawaii. Latin music, meanwhile, has dominated two mega-states: Texas and Florida.

Metal ranked very high in a number of “Central American” states such as Kansas and the Dakotas. Rap / Hip-Hop did not make the classification.

And who is the most popular artist in each state? If the number of shows is a measure, here is the breakdown. 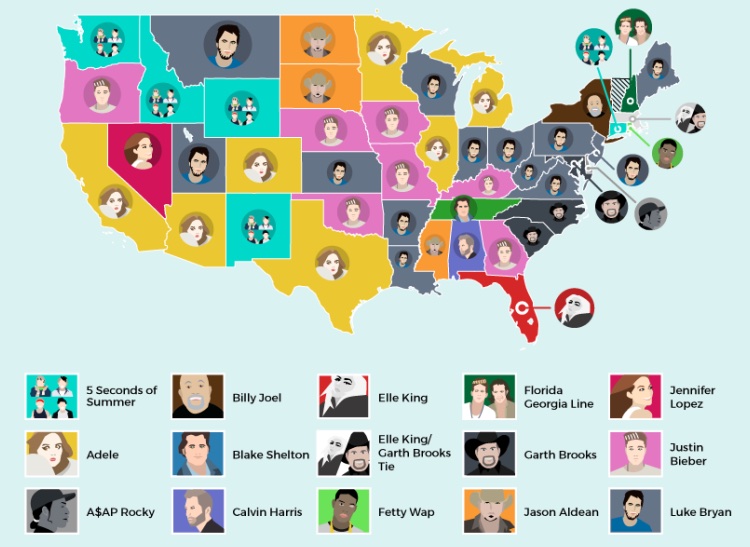 We will have a lot more geographic data and tours to come!