Voices of Change, the modern music ensemble from Dallas, kicked off its season Sunday with an engaging mix of works from the 20th and 21st centuries. The concert was presented at the Caruth Auditorium at Southern Methodist University for a virtual and in-person audience. Masks were worn by spectators and musicians, except for the winds.

The most recent of the pieces was that of the American composer Peter Askim Swallow fire (2020-21), for clarinet, violin, cello and piano. Co-commissioned by Voices of Change, it takes place in three movements over twenty minutes.

With Ahearn, violinist and Voices artistic director Maria Schleuning, cellist Jolyon Pegis and pianist Evan Mitchell gave a lively reading, skillfully spreading the technical challenges. The intonation was generally perfect, even when Ahearn and Schleuning played soft and loud in unison. While the ensemble is generally well balanced, Ahearn has at times dominated the others.

Offering Shostakovich’s Prelude and Fugue in D minor (1951), pianist Liudmila Georgievskaya conveyed majestic grandeur in the prelude with wide gestures and a rumbling bassline. In the fugue, she opened with majestic elegance, keeping the counterpoint light and flowing, and then explored romantic impulses.

The most experimental selection, that of the Finnish composer Kaija Saariaho NoaNoa (1992), for flute and electronics, features the text of a diary kept by artist Paul Gauguin. The performer whispers fragments of text into the flute, while navigating fast passages and unconventional techniques, including pitch bends, flutter tonguing, and multiphonics (two or more notes produced at a time).

The electronic effects conjure up ghostly echoes of the flautist’s material and sometimes join the musician live to create a chorus of flute sounds. Flutist Ebonee Thomas emphasized the haunting nature of the score and handled virtuoso demands with ease, but the pre-recorded electronics could have been louder. 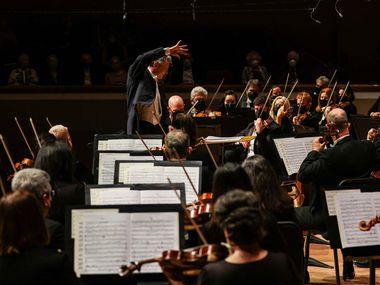